NOTICE: We are currently CLOSED. Please follow us on social media or subscribe to our newsletter to be notified of re-opening.

Please note we are currently closed

The recent wave of zero-waste stores may be well-designed, airy, and Instagram-worthy, but their novelty belies an important truth. While there’s no doubt that it’s time to reduce the quantity of plastic and other packaging waste that comes home with us from the grocery stores, shoppers don’t need to seek out stores made only of bins and jars to reduce their impact.

In fact, more and more mainstream grocery stores are turning to good old bulk bins—an age-old staple of the hippie co-op—to help shoppers cut their waste. And it’s about time.

According to the U.S. Environmental Protection Agency, containers and packaging make up 30 percent of what we dispose of annually. What doesn’t get recycled—and it’s a lot—ends up in ever-expanding landfills, air polluting incinerators, or accumulates en masse in the oceans. Pollution from single-use packaging has become a global crisis. And scientists predict that the amount of plastic will increase four times by 2050. 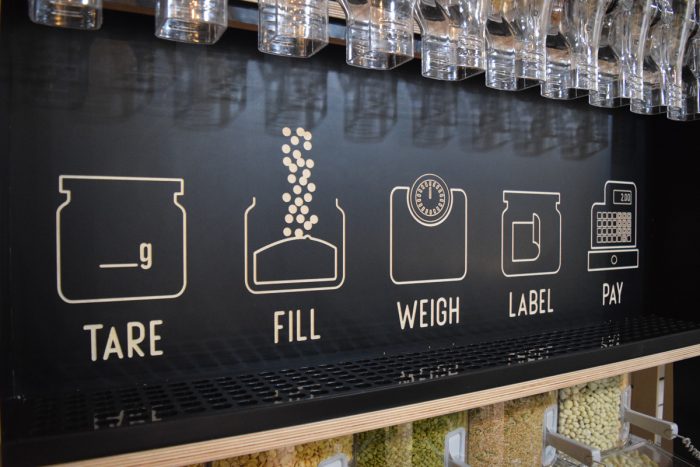 Although bulk groceries are emerging as a low-tech solution to our garbage crisis, a great deal of obstacles remain on the path to success. Laws surrounding food safety increasingly encourage single-use materials over reusable containers. And confusion among shoppers who have long been encouraged to grab-and-go makes shopping in bulk an intimidating affair. To truly reduce waste, advocates believe bulk must be more than just an aisle in the store—it must become a deliberate system that starts at home and continues seamlessly into the supermarket.

The End of Recycling and the Rise of Bulk

Today, reducing unnecessary packaging waste is no longer a fanciful environmental ambition. For the first time since the introduction of cheap plastics into the supply chain, it no longer makes economic sense to use a material once and throw it away.

“Long term, I’ve seen a pull away from doing a good job of sorting our materials and instead, moving towards single stream, where everything’s going into one bin. That’s destroyed the value of the materials, and our recycling markets have kind of fallen apart,” explains Kirstie Pecci, a senior fellow at the Conservation Law Foundation, who has been leading the Zero Waste Project since 2017. “Short term, I think people are paying attention to the waste system way more because the markets have collapsed abroad.”

In 2018, China implemented a new policy severely limiting U.S. imports of recyclable materials. Since then, the conversation about waste management has changed. According to the Institute of Scrap Recycling Industries, close to 30 percent of the market for U.S. recyclables dried up nearly overnight. Municipal recycling costs have skyrocketed. In Cambridge, Massachusetts, for example, there has been a 1,400 percent increase in cost, from $5 a few years ago to $70 per ton this year, says the city’s Recycling Director, Michael Orr.

While well-to-do cities including Cambridge can afford the increased costs relatively unscathed, many others can’t. According to the Recycling Partnership, 66 towns and municipalities across the country have cut their curbside recycling programs. Among the latest large municipalities to do so is Jackson, Mississippi, home to 165,000 people.

In response, public opinion on plastic in all its forms is changing rapidly. “Only in the last two years have people really begun to wake up to how plastic is interacting with our environment—land pollution, river pollution, ocean pollution—and how plastic is appearing now in our bodies,” explains Pecci. “People have started to recognize how dangerous and unsustainable it is.”

Some supermarkets, responsible for ordering, distributing, and commissioning countless packaged goods, have taken preparatory action. In December 2018, Trader Joe’s—a chain criticized in a petition for selling customers “as much trash as food”—announced its goals to eliminate a million pounds of plastic in its stores in 2019. Halfway through the year, the chain announced that it was implementing changes, including biodegradable bags for flowers and recyclable trays for meat, that would eliminate 4 million pounds of plastic per year. Walmart followed Trader Joe’s lead in 2019, unveiling an initiative to swap out its private brand’s packaging with “material that is recyclable, reusable or industrially compostable.” 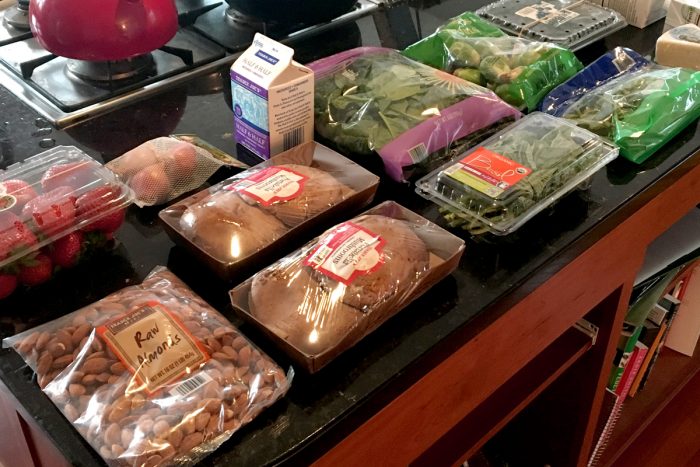 But both of these cases mark less of a shift away from packaging, and more of a gravitation to a different kind of packaging. For many consumers, who are concerned about the dangers of plastic pollution and remain skeptical about the headlong rise of single-use biodegradables, it’s a few steps too short.

Even the chains most leading the charge are some distance from eliminating plastic waste. The Colorado-based supermarket Sprouts—which now has more than 300 locations in 22 states—says bulk foods make up 30 percent of their stores. In January, the company started selling reusable glass jars and cloth bags to encourage a culture of refilling, and Bonnie Meyer, Bulk Category Manager at the chain says the company has already sold 125,000.

Yet even at Sprouts, promotional videos designed to introduce customers to the novelties of the bulk section demonstrate scooping and filling in disposable plastic bags—to the distress of nearly every single YouTube commenter on the video. Recent PR images show informational zero waste signage hanging, ironically, above almonds swaddled in plastic packaging—an entirely commonplace yet completely mixed message. 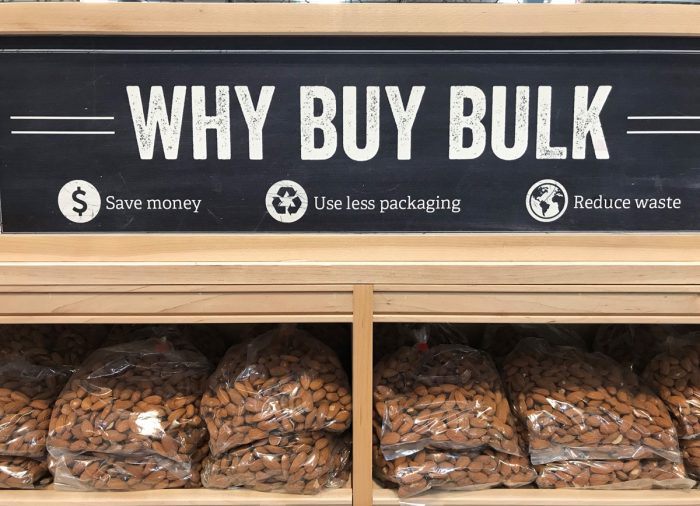 Bulk shopping has emerged an unwilling hero of sustainability: A hero because those rows of refillable gravity dispensers are the centerpiece of every zero waste store in the world. But unwilling, because outside of the small world of zero waste shopping, buying bulk to reduce consumer packaging is almost never encouraged by American businesses, and a good chunk of the time, it is even prohibited.

Can't find the product you're looking for? Send us a message and we'll get it for you!   CONTACT US

Disclaimer: MapleStaple does not represent or warrant that the nutrition, ingredient, allergen and other product information on our website is accurate or complete since this information comes from the product manufacturer and on occasion manufacturers may improve their products and update their labels. We recommend that you do not rely solely on the information presented on our website and that you contact the manufacturer directly if you have a specific dietary concern or question about a product. Further, MapleStaple is not liable for copyright infringement with respect to any information, images, trademarks, or logos displayed on the website.